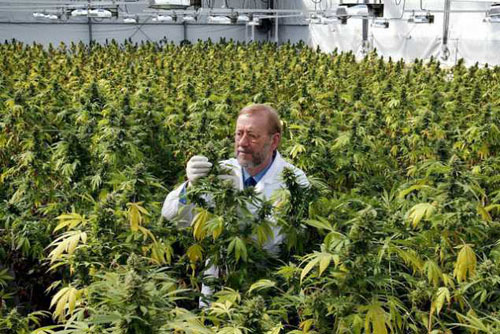 Cannabis production is about to go industrial, but you’ll have to head to Canada to take advantage of it. CEN Biotech, a nutrition company best known for an amino acid supplement, is working on opening the “largest and most advanced” legal marijuana production facility in the world.

The Ontario site will be able to grow 1.3 million pounds of pot from 50,000 plants — an operation that could produce $5 billion in sales per year when it starts producing in a few weeks after it passes government inspections.

“The facility is done, it’s ready,” CEO Bill Chaaban says. “It’s laid out [like] a manufacturing facility for prescription drugs.”

The factory, which will house 50 different strains of cannabis, is legal thanks to recently changed medical marijuana laws in Canada that ended home growth of pot plants and required users to buy from large-scale commercial facilities being set up around the country. The demand for medical pot in Canada created a backlog that led to the creation of these new “super-grow” sites.

“Basically, what the system has become is de facto legalization,” Chaaban says. “We foresee the Canadian market from going from 40,000 patients to 500,000 in next two years.”

The plant will be run by a “dream team” of former law enforcement employees, lawyers and farmers.