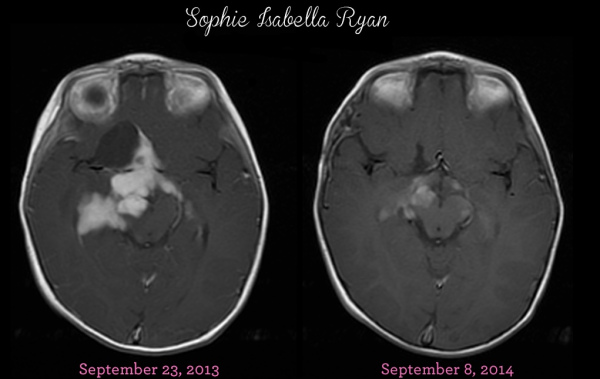 Sophie is Kicking Cancer With the Help of Cannabis Oil

Sophie Isabella Ryan was born October 3, 2012, perfectly healthy weighing in at 8 pounds, 7.4 ounces. Her birth had zero complications and I had the perfect pregnancy, doing everything right by way of diet and constant checkups with my OB. On June 20, 2013, Sophie had her first MRI scan after nystagmus, shaking of the eyeball, presented in her left eye. On June 23rd, at 8 ½ months old, Sophie was diagnosed with a low-grade, Optic Pathway Glioma brain tumor. My husband, Josh, and I were originally told that her only option would be a 13-month protocol of chemo in hopes to stop the development of the tumor. Since it is a slow-growing tumor, chemo was never meant to get rid of the tumor, and doctors told us if they saw even minimal shrinkage it would be considered a huge success.

At this point, after succumbing to an emotionally devastating situation, we decided to dust ourselves off and look for other ways to save our daughter outside of just Western medicine alone! After creating a Facebook page called “Prayers for Sophie,” a friend on Facebook put us in touch with Ricki Lake and Abby Epstein, who were filming a documentary about how cannabis oils kill cancer in pediatric patients.