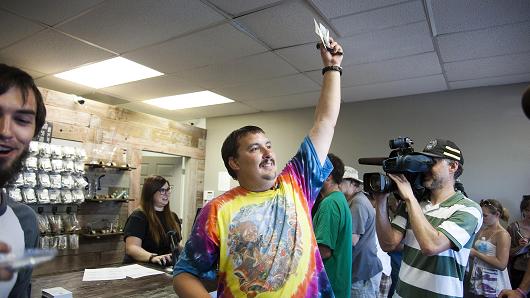 Mike Boyer, 30, was featured last week on  Spokane, Wash. local news after he waited in line some 20 hours to be the first person in the Eastern Washington city to buy legal weed at Spokane Green Leaf.

He happily posed for cameras and did interviews in his sunglasses and tie-dyed shirt as he claimed the title of “No. 1” pot buyer in Spokane. One of the local news stations, KREM-TV, followed Boyer home to watch him take his first few hits. But Labor Ready, a TrueBlue temporary employment company, ordered Boyer in for a drug test after seeing him smoke some Tuesday. He was fired after his employer thought he was high on the job.

But after his story went viral, and it was learned that Boyer wasn’t working, he had taken the day off. Boyer’s employer rescinded his termination.

“They gave me my job back and paid me for Wednesday,” said Boyer. “I was really excited.”