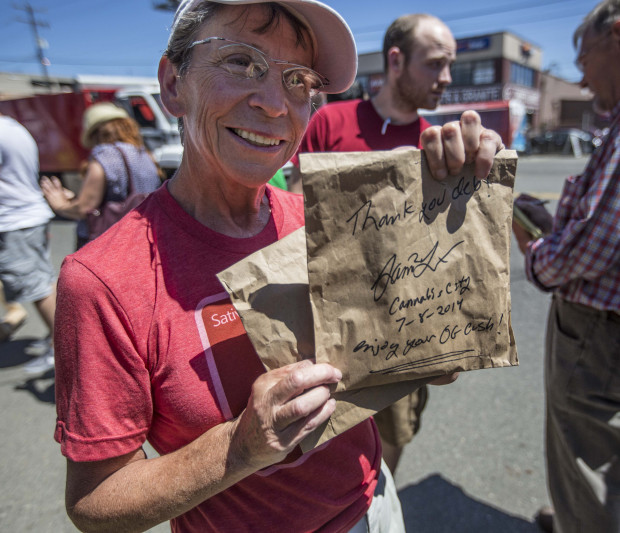 Deborah Greene, the grandmother who bought Seattle’s first legal pot is donating some of that herb, along with clothes she wore that day, and more, to the Museum of History and Industry( MOHAI), the 103-year old Seattle institution with 4 million artifacts.

MOHAI wants the mementos from Greene, 65, because they showcase “one more way Washington, for better or worse, is setting an example and setting itself apart,” said Jackie Durbin, the museum’s marketing and communications chief.

The museum is also collecting artifacts relating to Initiative 502, the measure voters approved in 2012, legalizing weed.

Greene bought 8 grams of pot from Sodo’s Cannabis City on July 8, the first day legal weed stores opened in Washington. She joked afterward that she might leave some of it to MOHAI in her will. No need.

Greene’s cap and shirt, a small sample packet of herb, a paper bag signed by the store’s owner James Lathrop, police tape Greene was playfully wrapped in, and a front page of The Seattle Times are all planned for an exhibit, Durbin said. Lathrop may be donating items from his shop as well, she said.

MOHAI is bringing a national exhibit on Prohibition — the one banning alcohol from 1920 to 1933 in the U.S. — to Seattle next spring and would like to incorporate I-502 artifacts into the overall story, Durbin said. “The story of today’s legalized marijuana retailers are part of a great American debate about regulating morality that goes back hundreds of years.”